How does men show commitment? This is one of the vital question asked by every lady who desires to be in a Healthy relationship .

To men, commitment is not just a “mere” word.is not even an act. But an investment.

You know how crucial investment is in the lives of many especially goal getter and people who desire to be successful and make a lot of fortune out of their lives  right?

Before people begin to consider about investing their fortune on something.

They must have considered the possible outcome and its possible yield in future. That implies that they have to undergo a thorough thought and make a well detailed analysis.  After so much thoughts,

They must have reached an uncompromising  decision of whether on not to invest. At this point, they must be certain of their decision and be sure there is no doubts or double minds about it.  Similarly, this is just the definition of commitment from the male point of view. And this is why so many men develop commitment phobia in a relationship.

Men’s view about commitment is quite different from that of the female gender. This is why men show commitment when they are certain of the future and not just at the beginning of a relationship.

Recall that the Emotional differences In men and women ain’t similar. While women are guided by emotions, men tend to be more logical and realistic.

For example, when a woman is in a new relationship, and probably so much in love with her partner,she will become overly attached to the point that she will  expect everything done within a short time.

Ranging from commitment to formalizing the union. Women can’t really wait to be proposed to. Every woman regardless of how long they’ve dated their significant other is hoping and anticipating for that moment when he will pop up the question concerning marriage.

While men on the other hand sees commitment and marriage more like a huge responsibility. Hence the reason why they don’t rush it. They usually take their time to be certain they are ready and much prepared for the responsibilities ahead.

However, despite the fears associated with commitment. A time will definitely emerge in a man’s life, when the need to commit will be so intense and mandatory. This is the interesting part every woman desires to know. How do men show commitment?  What are the signs to show that he  longs  for a   long term relationship. 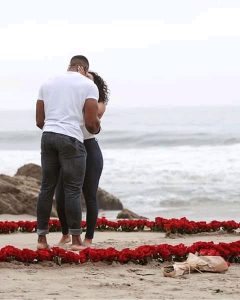 This is one typical ways by which men show commitment. While a woman may be eager to meet  his significant other’s family or probably introduce hers to him even at the early stage of the relationship.

Men loves taking it slow and steady. They hate to be pressurized on such as that is a bold step.

This explains why men who just want flings  avoid involving the family members because that is a huge part of commitment. They often imagine a likely scenario of promising to sponsor someone only to abandon  them and leave them devastated.

Except a man has developed some sort of trust and confidence and is rest assured that she is whom he desires to spend the rest of his life with, he will never take the bold step of involving family members yet.

This explains  why a lot of them abscond from involving  their family members at the early stage of the relationship. To women it might seem like a normal act, but to a man, it means a lot.

Entrusting you with his personal items.

One of the apparent ways men show commitment is by entrusting you with things that are valuable and confidential to them. Commitment goes with trust.

For a man to commit,,he must have established some kind of trust for her significant other.

And when there is trust, security becomes certain and a necessity. With that, he can easily leave some of his personal items without having fears.  Some of this items ranges from his house keys to his ATM cards/ pin numbers. and so forth. These are items he wouldn’t  leave for to just any individual.

He will discuss confidential matters to you.

Another vital ways by which men show commitment is by confiding in you in their personal/ family matters.

There are some personal matters we may not like to share with our friends except the one who is so close and dear to us. So when he sees the need to confide in you, that is a big sign of commitment.

Such confidential matters can only be discussed with family members, this shows that he wants to include you as a part of his families too.

He shares his goals with you and seeks for  your opinion.

He has other friends, yes!!! But your opinion matters a lot to him and he sees it as a priority. Soon, your opinion will always be the first to sought for when you both finally settles down.

And so seeking for your opinion now implies that he’s looking forward towards that in the future.