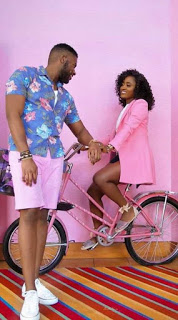 And so you met this handsome, and intelligent dude. You admired him secretly but couldn’t approach him as you felt it was the most absurd thing to do for a lady to approach a man. Instead you displayed some green light indicating your interest.

Fortunately, it worked perfectly. He got the message, wooed you. You became excited as that is what you’ve always anticipated for. Not quite long, you both started dating. The first few month was exciting and a replica of what a perfect relationship ought to look like. He called frequently, messaged you on regular basis. Requests to see you. Just the moment you thought you’ve found the one. Just the moment you became head over heels in love. Just the moment you excitedly wants to reciprocate his love. Alas you were wrong after all. As he suddenly started pulling away gradually. giving you the silent treatment. No more calls, no more text messages. He suddenly disappeared into thin air. It has just ended!!! Just like that?you asked yourself rhetorically. . You tapped yourself several times to ensure you weren’t dreaming. You had no other option than to wish and hope he would return from his cave or secret abode. You waited but all to no avail. Reality struck on you when you realized you have been deceived and jilted. You felt like smashing your android phone especially that moment you dialled his number. It rang several time, but he wouldn’t just pick up. There is this intense bitterness. In you, you just feel like punching or stabbing him. You can’t help but destroy everything around you. However, in spite the bitterness. You still had to summon courage and move on. As there was absolutely nothing you could do to avert the situation. We’ve all been there at one point in our life or the other. During the wooing stage, a man becomes interested and would do everything to get your attention. But as soon as he has done that, he begins to withdraw and sees no reason to press further. Does this look like your story. Don’t worry, let’s take care of this. we have to start first by looking out for some facts about men. Psychologically,men are egocentric in nature. They tend to display their ego in every aspects of a life. They see relationship more like a game and always want to be at the top of it.

During the chase, their ego is placed on a contestant level just like a sport game. Hoping and anticipating to beat their opponent. And as soon as you accept their proposal. Their ego emerges victorious as it is assumed it has beaten its opponent. At that point, they becomes authoritative. Hence the bossy feelings. But after sometime, they become use to the position, hence no longer finds it interesting or fascinating as it was previously. The thrill if the game is the chase. Does that get you in a more confused state? I know as you are reading this, you will be wondering why some women were lucky to have a man who never got uninterested at any point in their Relationship. I will tell you why. The answer is very simple and concise. Their Men approached them and discovered that their life was as interesting as the chasing period and so never dared to leave as they didn’t want to miss the juice.. The greatest mistake to make is to think that a man would love you forever just simply because he found you attractive. No!!! There is more to offer than your physique. When a man leaves after the wooing stage, is either he was never in love or he discovered that it wasn’t worth the stress after all. Now we are focusing on the later. Is just like admiring a cream in the market. People have always talked about its glowing nature on the skin. So you decided to give it a trial. After some months of applying it on your skin, but got no different result. You became of tired of it. As you discovered the product was not worth the hype after all. If you don’t want him to pause after the game of chase. Then you need to come up as a tough opponent and rival. Don’t give him that opportunity of defeating you. Upgrade your life, he needs to see your worth and so many reasons why he needed not to disappear. Don’t be desperate and don’t give in so quickly. Avoid being emotionally weak. Develop self confidence. Upgrade your life. Let him not see sex or romance as the only thing you can offer. Give him the reasons not to walk away from your life as he wish. Show him you’ve gat confidence in yourself and not ready to condone any attitude he may put up.

2 thoughts on “Why men withdraw after the chase.”